The Van Slyke Agricultural Museum portrays the rich history of the Treasure Valley. With Civil War era artifacts and old farm equipment, the museum pays tribute to the Idaho's farmers, pioneers and settlers.

C.M. Van Slyke was a farmer who put down roots in Caldwell in 1917. In 1934, the community built a museum in his namesake to demonstrate the area's historical values. It began with two Civil War era cabins, and over the years has received donations such as a caboose and rail car from the Crookham Company and agricultural equipment from the Van Slyke family.

The Van Slyke Museum began with the relocation of the McKenzie and Johnston log cabins to Memorial Park in downtown Caldwell. The intent was not initially for the area to become a museum but the cabins were moved to protect the structures from vandals.

The McKenzie Cabin was built in 1864, in the wilderness area that is now Curtis Park, by Robert McKenzie and his wife Emma Curtis McKenzie. After the death of her husband, Emma Curtis McKenzie lived alone in the cabin and was subject to a number of attacks by outlaw Native Americans. She is said to have fought off those attacks by shooting her shotgun through the windows of the cabin. Upon Emma Curtis McKenzie's death in 1914 the cabin was deeded to the city and moved to its present location in 1934 by the Native Daughters.

The Johnston Cabin was also built in 1864 in the Dixie area of Caldwell. It was home to three trapper brothers all of whom remained bachelors for the duration of their lives reportedly because one who was supposed to marry forgot to show up for his wedding.

The Van Slyke caboose was one of the first for the Oregon Short Line Railroad and operated in the Pacific Northwest between 1917 and 1962 spending most of that time in the Columbia Gorge.

The refrigerator car was also built in 1917 and operated on the Union Pacific Railroad. It was based right here in Caldwell and was used to transport mostly poultry but also some fruits and vegetables from Salt Lake City, UT to Portland, OR. Caldwell company Scott's Ice used to fill the cars with ice blocks to preserve the produce and meat for the journey.

The caboose and refrigerator car were retired from the railroad in 1963 and was then bought and donated to the museum by the Crookham Company.

The Van Slyke Museum also has many antique pieces of farm equipment on exhibit much of which was used in the settlement and development of the city. They have been graciously donated to the museum to illustrate the agricultural history of Caldwell.

The restoration of the 1882 wooden caboose started in August with the skilled work of the Wasatch Railroad Contractors. They rebuilt and replaced the cupola windows and installed a rubber roof to secure the car, and have started work on the interior, removing old plywood and exposing the beautiful original wood. They also got a good start on replacing the windows on the exterior. This exciting project is expected to be completed by spring 2020. 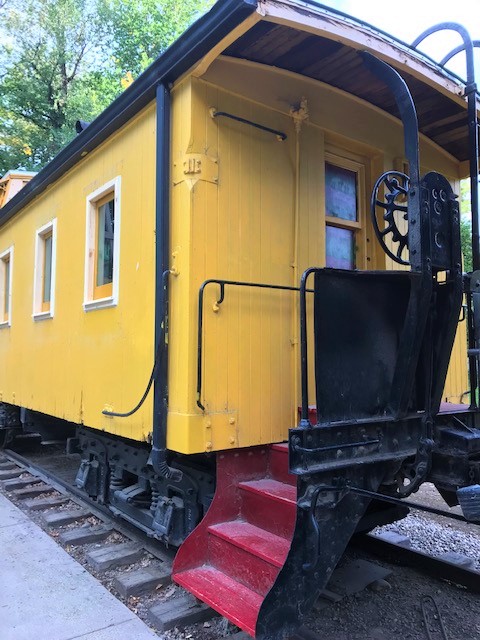